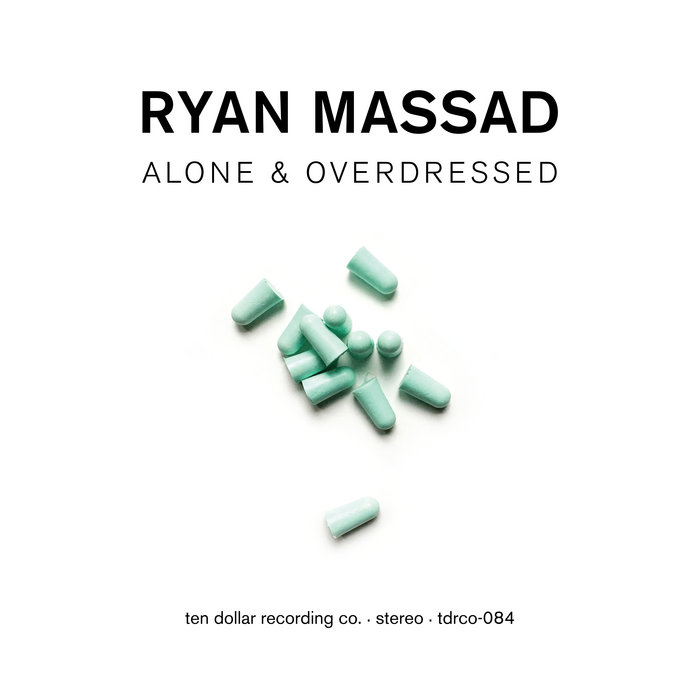 A layered mixture of stylistic variegation perched atop a cornerstone of airy bedroom folk, Ryan Massad’s new full-length Alone & Overdressed is out May 30, 2017 on Portland’s Ten Dollar Recording Company. The album follows on the heels of a number of recent self-releases under Massad’s “Morel” moniker dating to 2014, but Alone & Overdressed is the first under his own name. Highlighting Massad’s oft road-weary take on golden-era stone washed folkie warble and fuzz country strum, Alone & Overdressed is a mellow yellow rabbit hole of texture and vibe, replete with hummable/strummable front porch ditties, classic folk run through the reverb blender, and late-night, red-eyed bedroom psych excursions. Weaving in and out of the whole deal is Massad’s grounded take on simple, melodic song structuring and orchestration. With Massad at the helm of all the record’s instrumentation and vocals, Alone & Overdressed is peppered through with some fine self-made psy-folk moments graced with the nostalgic cadences of dusty eight-tracks gone by, the album’s thirteen pieces echoing the battlecries of battalions of DIY bedroom recording enthusiasts from the hippies to the millennial nation and beyond.

Toying with and reassembling twinges of dream folk, paisley underground country, and scarlet begonia psych, Alone & Overdressed is a mashup of familiar themes and well-trod ground made fresh once again by Massad’s easy going, even keel grasp of the proverbial tune. Individual tracks generally revolve on simple arcs, with languid guitar lines, underwater keyboards, and whispery vocal falsettos drifting along over the straight ahead chordal structuring. Idly cruising hither and tither from tunes like the workingman’s country folk of “Nearly Lost My Mind”, to the stoned color-splash psych of “Dead Man” and the Shins-esque jangle of “Don’t Be Careless”, Alone & Overdressed possesses some color and shape of its own for sure, and is bound to bend some ears.

From the plaintive phrasing and vocal haze of “Always Out” and to the weary soul gazing introspection of “Vapor” and at many points throughout, Alone & Overdressed is perhaps at its best when Massad’s witty, everyman poetics are on full display. Take a few lines of “Vapor”, where he sings, “Holding on, I’m stuck in my head, missing what’s next, obviously it’s all just perfect, the good, with the bad, with the good, with the good, with the bad…Arms get sore, swimming these days, not these arms, jeans get torn and my heart gets sore, and I’m born, it’s all the same, in and out, all the same, in and out…”, the song’s resigned lyrical visioning and Massad’s crackly croon blending seamlessly into the tune’s poppy, jaunty sunset folk.

Or take a listen to “Nearly Lost My Mind”, which is describing either a break up, or maybe a heavy mushroom trip (or both): “Oh how I’ve loved you, woke up in the morning with my sun setting on you, I said goodbye, and I laid back down and died…Woke up in the morning, warmth on my mind, thinking did I hold you close enough, and how hard did I try, thinking how I’ve nearly lost my mind”. There’s a certain wise whimsy to many of Massad’s lyrical schemes that thankfully doesn’t take itself too seriously while dissecting scenes of real human intrigue, with most of the material on Alone & Overdressed dwelling on love, loss, and plenty of other random shit in-between. As such, there’s a nice balance struck between feeling and freak-out, and a simple maturity tempered with Never-Never Land playfulness.

In the meantime, the music on Alone & Overdressed is varied enough to warrant repeat listens and deeper explorations. Massad takes the listener on a trek from the nervous vocal harmonies of “Big Wave”, to the groove and layered end-of-the-rainbow freak funk of “Fade”, the foggy loping of “Storming Out”, the thrift store fringe coat psychonautics of “Summers”, and the 70’s stoner van theme song “Stoney Jabroni Makosa”. There’s an extreme throwback quality to many of the tunes herein, such as the warm, vintage synths and forested six string picking of “Treefort”, the bubbly Haight Ashbury croon of “Lightest Toes", the flashback folk of “Early This Morn”, and the gossamer 60’s-era psylocibe shimmer of “Fade”. Themes and references on Alone & Overdressed are present but not overused or overly aped, and as a result the record is a pretty timeless jaunt down the annals of a half century of Western psychedelia.

Humble music enthusiast of everything from the Dead to the Shins, Vashti Bunyan to Spacemen 3, do yourself a favor and check this one out, you’ll likely find something in there to satisfy your earholes. (Reed Burnam)