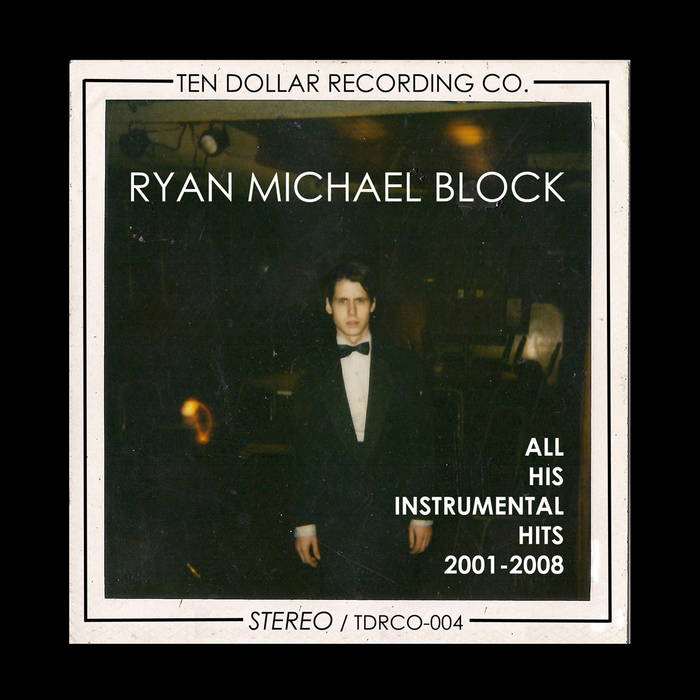 The myriad work Ryan Michael Block has out on the Portland-based Ten Dollar Recording Co. label makes for a diversified listen. All His Instrumental Hits 2001 - 2008 culls together another knapsack of musical oddities from Block’s vaults, and the vaults are deep. Seems like the 00’s were a pretty prolific time for Mr. Block, as the bulk of his albums stem from the decade just prior to the one we now inhabit. Much in the vein of other eclectic and hyper-prolific closet minstrels such as Bob Pollard or Rob Crow, this guy is a veritable cottage industry. And his output shows no signs of abating anytime soon, to the benefit of all of us listening out here.

If Block’s more recent work with fellow label-mate Mariya May in What in Your Heart Can Put You in a Trance has tended to coalesce into sometimes sprawling yet altogether cohesive structural units of song and sound, the really great thing about his solo work is its apparent spontaneity and freedom to simply create, unfettered by convention or expectation. Block has a penchant for melody, and it shows in the way he spins off numerous hooks and progressions as if simply afterthoughts, something that is endemic to all his many albums. The raw melody present across All His Instrumental Hits is something other bands or artists might struggle with producing just a few times on an entire record, much less sustainably for upwards of twenty tracks. Genres and arrangements are varied and sporadic, and taken together, the song titles on All His Instrumental Hits coalesce into a single, playful Plotinian sentiment straight out of a textbook on non-dualist metaphysics, furthering the sense of artistic license and insularity here. If it seems at first a bit inaccessible, it’s really not: this is musician’s music, documented with passion, recorded over a period of years and now forming the sonic contours of a decade in the life and progression of the artist. The best part about endeavors such as Block’s should be the somewhat messy, organic complexity of it. You can’t just buy this prefabricated in any store, it has to be sown in the ground of individual vision. When it comes to conformity, resistance is fertile, so they say.

As the album progresses, the listener is treated to a wash of sound and mood. Tracks range from breezy, airy island tunes, to slightly Beatles-esque freak-out nuggets, groovy jam circuitry, placidly rotating post-apocalyptic soundscapes, slices of easy folk-twang, distortion-laden California surf trips, nervous post-punker pop tunes, and dub-friendly treks through jungles of delay and reverb. Melodies are frequently catchy, and as stated previously, the rub here is the variety, akin to wild nature versus the mindlessly blasé music monocultures that so often assault our ears and sensitivities.

Not to suggest that everything on the album is perfect, and hopefully the point of these paragraphs is that it shouldn’t be. Critics could surmise (with some validity) that Block’s album drifts at points, that the lack of vocals leads to a lack of moorings, or that the sheer fecundity of the output leans more towards simplicity rather than measured, developed complexity. Similar accusations have been leveled at the aforementioned Pollard and Crow, though these types of rationales really boil down to a question of taste rather than any sort of sustainable critical insights. It’s simply hard to argue with inspired, idiosyncratic creativity when so much of what passes for art is total bullshit fashion and hype, but of course, everyone is always entitled to their opinions and should be. This reviewer is too. What the listener is liable to take away from this record is his/her own sense of Block’s motivated artistic drive, and who knows, the inspiration to get out there and do it themselves. Very cool stuff indeed. (Reed Burnam)

Creating a truly worthwhile and captivating instrumental is no small feat. Jazz and club music aside, it’s all too easy for a modern lyric-less song to come off as masturbatory, repetitive, lazy, boring, or self-indulgent. Back when people listened to CD’s, the instrumental was often rightly dismissed as the filler track we all skipped. In a world of hooks and choruses, a track that devotes itself to neither and yet still manages to hold our attention is rare. To create several years worth of such material and assemble them into a single, very listenable collection is an undeniable accomplishment. R.M.B.’s brilliant (and ironically titled) collection, All His Instrumental Hits: 2001-2008, can safely be regarded as just such an achievement.

Groovy and ambient, patient with the melodies and thorough with the textures, what Block assembled here is beyond merely listenable or passable for background music. He takes turns with reggae, trance, ambient music, cinemascapes, and psychedelia. Regardless of the jumping off point however, each track incorporates Block’s seamless blending of live and digital instrumentation, a rhythm section reminiscent of the Beastie Boys’ softer side on their wonderful The In Sound From Way Out, and some trippy, knob-twisting effects that glue the more disparate parts together to make them whole.

The end result is a nice big batch of heady, dub-tinged goodness—engaging and and surprising without being intrusive or dull. Synthetic and organic flavors mesh and overlap to create a collection of songs that seem to thrive on contradiction. Plentiful are spacy synths, bouncy reverb, and occasionally that great sonar ping noise. The production could easily have been overdone but instead feels just about right and the tracks are well-paced, and smartly short, to walk your ears effortlessly through all 21 tracks.

Stand-outs include the Blur-inflected "All of It's Infinity Parts" and the infectious carnival ride "Exists." On the other side is the beautiful, simple, piano melody of "The Mind Rejoices In," which pulls on the dreamier sets of heartstrings some of us discover in dimly lit rooms.

Recommended for almost anyone, but especially those of us still at university with long papers to write or anyone driving through the desert at night alone looking for UFO’s. (Hutch Hill)